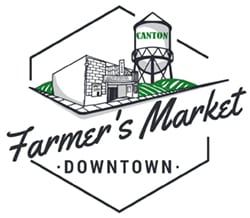 When Abigail Cox started making fresh sourdough bread to sell at the Farmer’s Market in Canton five years ago, her business didn’t even have a name.

“Everyone just knew her as the woman who made the delicious bread,” says Stacy Crossley, executive director of Canton Economic Development and the Farmer’s Market. “We had a contest to give her business a name, and she became The Kneady Woman.”

Now, The Kneady Woman has grown by leaps and bounds, and she credits the Farmer’s Market with much of her success.

The Farmer’s Market, now in its fifth year, has grown and expanded right along with many of the vendors. It opened in 2018 as a producer-only market in Canton’s historic downtown on land the city provides.

The producer-only market is unique, and Stacy believes that concept has led to the event’s success. “If you didn’t produce it, you can’t sell at our Farmer’s Market,” Stacy says. “The market could get a lot bigger, but this is about supporting local producers and shopping local.”

Between one and two dozen local producers of fruits and vegetables, baked goods without chemicals, honey and related products from local beekeepers, beef, chicken and eggs, mushrooms and locally roasted coffee beans are among the vendors set up every Saturday morning from April through October. An average of 300 people shop each week.

As with The Kneady Woman, the Farmer’s Market led to expansion for businesses such as JT2 in Lindale. “They came when we first started, selling local beef. And then, they opened a restaurant,” Stacy says. “Now they’re opening a second location.”

JT2 no longer participates in the Farmer’s Market, but its owners credit much of their success to the connections there. Another local beef producer, H and H Quality Meats, filled their spot.

“They raise wagyu beef,” Stacy says. “You can get wagyu beef in Canton, and that’s pretty cool.”

The Farmer’s Market requires verification for applicants who want to participate in order to confirm they produce their wares locally.

Vendors pay a $25 fee for the season, and organizers monitor the number of vendors who sell the same products to keep duplications low. “We did not create the market to make money,” Stacy says. “It was created to be a benefit to the community and the local farmers and producers.”

Open Saturdays from 8 a.m. to noon through Oct. 1

The vendors might change from week to week, but there’s a list of producers registered for the season at cantonmainstreet.org.

With Canton home to First Monday Trade Days, organizers wanted to make sure the Farmer’s Market did not mimic the same idea. “The hope was to reach true local farmers who produce and sell without having to compete with vendors from outside the area who buy and resell, as many markets do,” Stacy says. “We want to support our local farmer/producer — the small guy who believes in the healthy practices of growing, producing and cooking without harmful chemicals and antibiotics.”

As the Farmer’s Market has grown, new vendors and events have added to it. Local artisans now set up, and local musicians sometimes play. The market also features cooking classes, water- melon eating contests and other seasonal events. Some vendors prepare and sell food, such as breakfast tacos, using only local products. “Having a true producer’s market has shown to be in huge demand, and our 2021 season was a big success,” Stacy says. “We’re having a great season this year.”