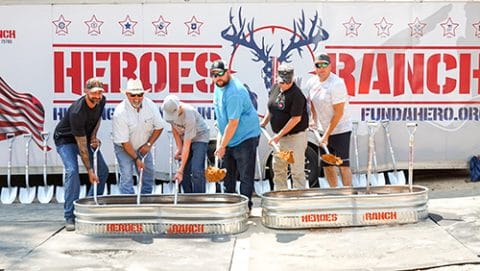 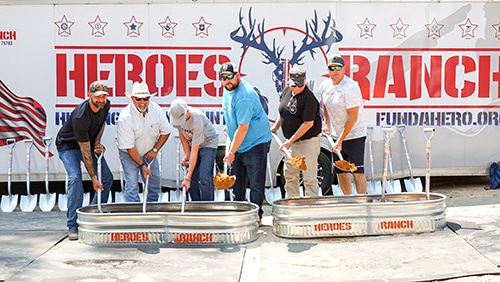 Heroes Ranch offers a retreat for disabled veterans and their families

Growing up as part of a family of veterans and military contractors in Military City USA, Freeman Sawyer developed a deep appreciation for the armed forces at an early age. Now a successful mortgage banker, the San Antonio native has launched a unique endeavor to give back to the men and women who’ve sacrificed much in service.

In 2020, Sawyer and his wife, Susan, founded Heroes Ranch, a nearly 300-acre hunting and recreational retreat in Quitman for injured, wounded or disabled heroes. “Both my grandfathers were in the service, and all my uncles were in the service, and my dad was a contractor on the air bases,” Sawyer says. “That’s where the idea started. I just don’t think we do enough for our heroes.”

Sawyer took great care to ensure that the ranch offers everyone a complete hunting experience. While other nonprofits take disabled veterans hunting, few – if any – have the infrastructure of Heroes Ranch. “I don’t know that there’s another ranch that has this level of accommodation,” Sawyer says. “Everything that we’re doing is to give them their freedom back.”

Existing buildings were modified to be as closely aligned with the Americans with Disabilities Act as possible. Accessibility is the driving force behind equipment purchases and new construction projects. In late July, the ranch hosted a ground-breaking ceremony for Heroes Cabin, a six-bedroom, seven-bath lodge that can accommodate three families at a time. The cabin will include three ADA-compliant suites, complete with roll-in showers.

Heroes Ranch also has an Action Trackchair, an all-terrain wheelchair that allows users to hunt. If users aren’t able to operate the chair themselves, the hunting guides can maneuver the Trackchair by remote control. “It’s a really cool piece of equipment,” Sawyer says. “It’s on my list to get a few more as we get going.”

The ranch even has the ability to modify the guns used to hunt the blackbuck antelope, hogs and whitetail, axis and fallow deer on the property. “I run with some guys who operate the Adaptive Training Foundation, so if we need to do some adaptations to a rifle, they make them where you can bite down or blow to pull the trigger,” Sawyer says. “We also have teamed up with some guys from Accufire Technology for some scopes. They’ve got Bluetooth capability, so you can see it on your cellphone. The guide can then help the shooter make adjustments. We also have a thermal version so we can hunt hogs at night.”

Sawyer’s hope is the retreat will foster new friendships and support networks. Families invited to the ranch will stay for several days alongside others from similar backgrounds.

“These guys become isolated because nobody else understands, and then their family becomes isolated,” Sawyer says. “I can understand that part because I’m the father of a child with special needs. I understand isolation, I understand their behavior might be a little different. With Heroes Ranch, we can bring these families together and they will realize that there are other people just like them, and the healing can start.”

All the expenses for the heroes and their families are covered – including meals, hunting licenses, taxidermy and meat processing fees. “I don’t want them to pay for anything,” Sawyer says. “The goal is to give them back freedom for that week. There is healing that happens with the fresh air, pine trees and the outdoors.”

Sawyer paid for the property and subsequent improvements himself. Heroes Ranch accepts one-time and recurring donations to cover expenses, and several sponsorship packages are available that allow the sponsor to hunt on the ranch, as well.

“The sponsor would come in Thursday night with his or her family and join the celebration. They could stay anonymous, or they could be introduced to the heroes,” Sawyer says. “Then, the sponsoring family could stay the weekend and hunt and write the whole thing off on their taxes. It’s a win-win for everybody.”

Heroes Ranch is not expected to be fully operational until the spring, and Sawyer is encouraged by the response he has seen so far. Several hundred people showed up to the Heroes Cabin groundbreaking, and the Heroes Ranch website is collecting applications from heroes, prospective volunteers and donors. It’s a trend he hopes will continue to build steam.

“I think we can help a lot of people, grow a good network and help like-minded patriots to maybe convert their ranch to a version of Heroes Ranch,” he says.

“I think we can help a lot of people, grow a good network and help like-minded patriots to maybe convert their ranch to a version of Heroes Ranch”.

To find more information on Heroes Ranch, nominate a hero, become a sponsor or volunteer, go to heroesranch.com or call Freeman Sawyer at 714-936-5700.